Marianas RC&D and Beautify CNMI are teaming up to replace some of the dying trees along Beach Road. We have plans to extend this program island wide, but first we want to replace the unhealthy (or missing) flame trees (Delonix regia), which are the CNMI's official tree, along the length of Beach Road. We also have plans to plant coconut trees along the edge of the beach, but we have a little more work to do before we can start planting them. Some of the government entities are hesitant to plant coconuts because they are afraid of falling coconuts killing a tourist.

They planted four trees on Monday.

This morning we planted 7 more and we couldn't have done it without the help of MOVER, a local community group.

They came to the RC&D office on Friday to inquire as to how they could get involved in Beautify CNMI. More specifically, they wanted to know how they could help us plant trees.

We said that we could probably get something together by the middle of next week, but that wasn't good enough for them. They wanted to do something NOW! Joe from Parks & Recreation said he could get us some trees if we drove over to pick them up, so that's what we did.

The planting on Monday was 80% ceremony and 20% tree planting, but this morning's planting was all about getting trees in the ground. On Monday they had the luxury of a backhoe. This morning we used shovels and picks. 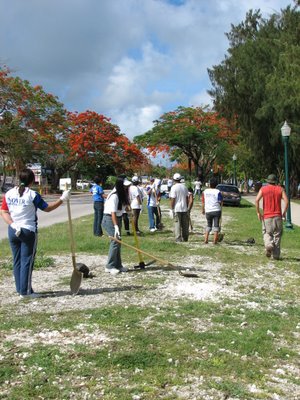 I was more than a little discouraged when we started digging. I didn't realize that we'd be digging through compacted coral aggregate. The shovels alone were useless. We had to break up the coral with the picks first. (After about five inches of coral we reached soil, so don't think that we were wasting our time by planting trees on top of rock.)

The MOVER volunteers were amazing. From the smiles that were on everyone's faces the entire morning, you would have never guessed that we were digging through rock. 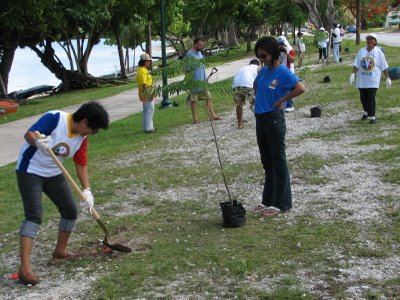 Here's Captain Carl taking a couple whacks with the pick: 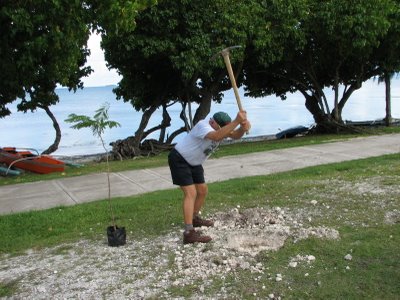 This is the first tree being put in the ground. The MOVER President, Marites, is about to throw in the first shovel of dirt: 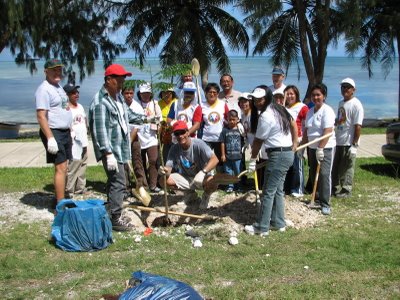 Here's Ken showing the MOVER volunteers how to properly plant a tree. After he showed them how to do it, they split up and planted the other 6 trees: 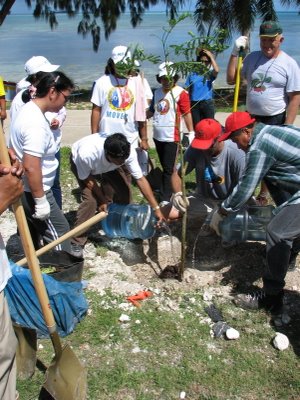 Representative Cinta Kaipat stopped by to thank us for our work. Here she is talking to and posing with the volunteers (photos courtesy of Gus Kaipat): 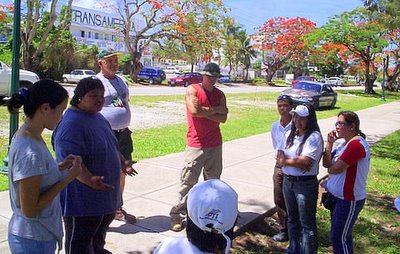 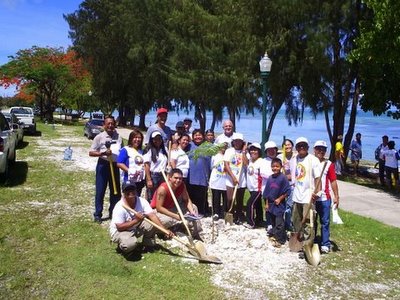 And the last tree of the day going in the ground: 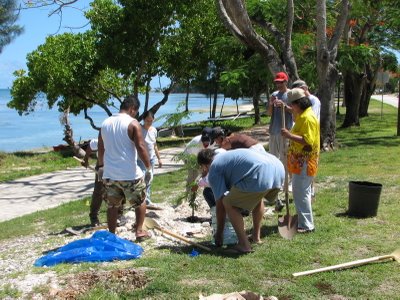 Keep the balls rolling!! Nice posts you have given for us.