Over our barbeque potluck lunch yesterday, some of us got to talking. Wouldn't it be nice to turn the old abandoned airfield into a neighborhood park? There is already a community center and a basketball park, all we'd have to do is to fill in the spaces with park benches, a playground, and lots of trees and picnic tables.

Well, should we decide to work with our Beautify CNMI partners and turn it into a park, we've already got a pretty good headstart. On Sunday, 76, yes 76, volunteers spent 9, yes 9, hours cleaning up the Koblerville substation and old airstrip.

This continues the project that we started last week, where we cut back brush and grass. This week we finished clearing the area along the road. We also washed off and painted over all of the graffiti on the substation. 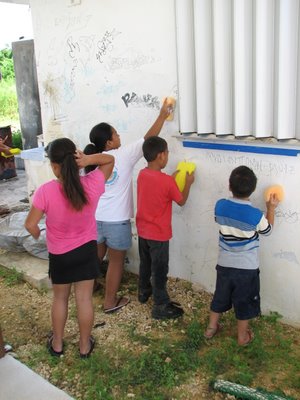 The kids did a fantastic job of washing off the old paint. This ensured that we had a nice clean surface for us to paint over. 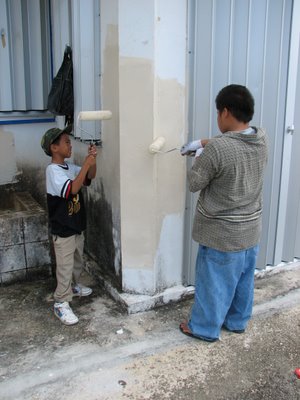 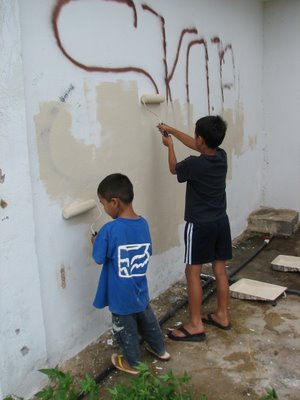 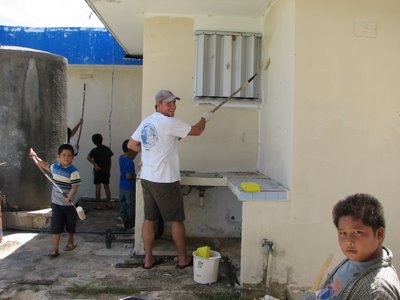 While the kids picked up litter around the site and painted the first coat of paint over the graffiti, the adults were hard at work using bushcutters and machetes to cut back the brush: 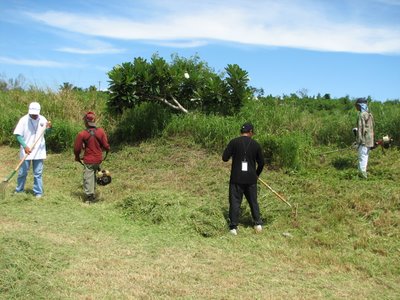 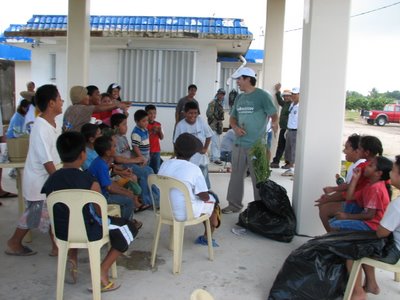 I wish this picture was in better focus. You can see from the photo that the number of boys far outweighed the number of girls. The kids weren't motivated on their own to pick up trash because they all wanted to paint and/or use the chainsaw. So how do you get 20-30 kids pumped up to pick up garbage? Easy, just make it a contest! I challenged the boys to pick up more trash than the girls and vice versa. In this picture we are deciding who the champions are...then I discovered that instead of picking up litter, the boys were stuffing their bags with yard waste. Cheaters! 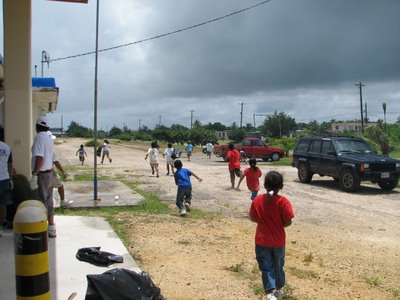 So 15 seconds later I said the contest was still on and I challenged the boys to actually beat the girls, even though there were far fewer girls than boys. The kids immeadiately charged off to pick up more trash. Can you guess who won? The girls, of course! 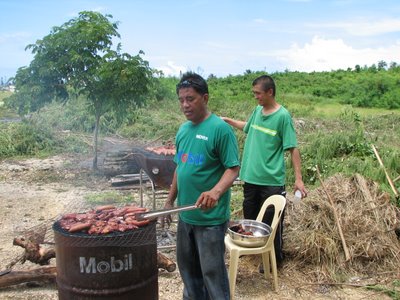 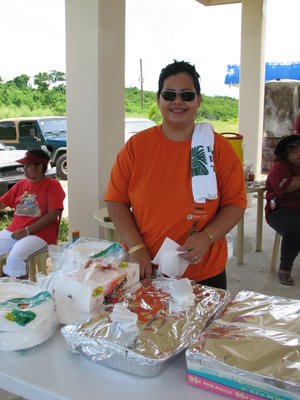 The previous two pictures are of our chefs. They prepared the food that we feasted on. 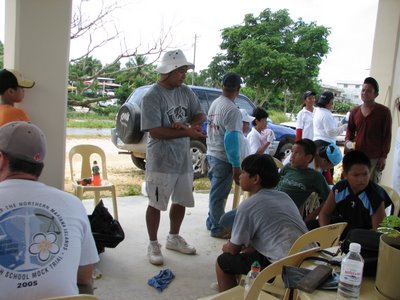 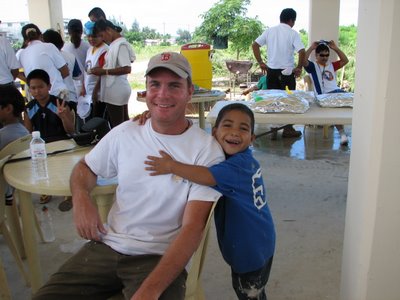 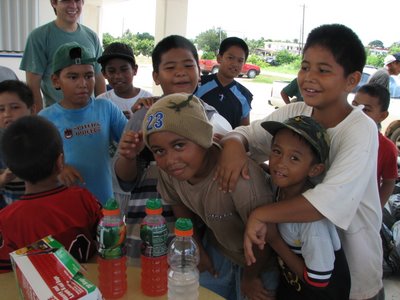 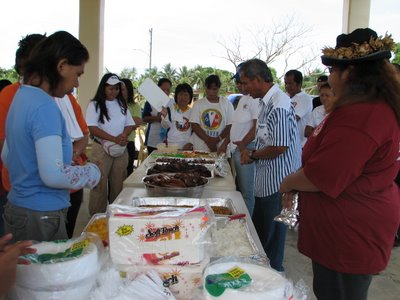 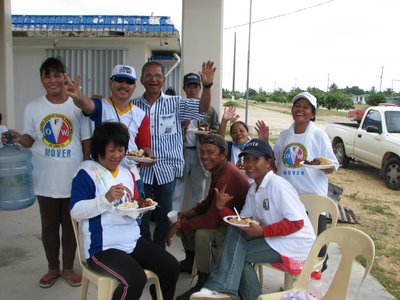 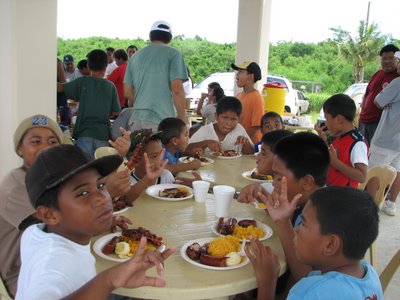 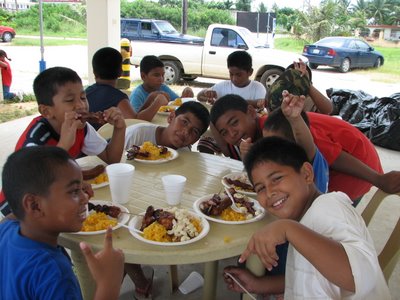 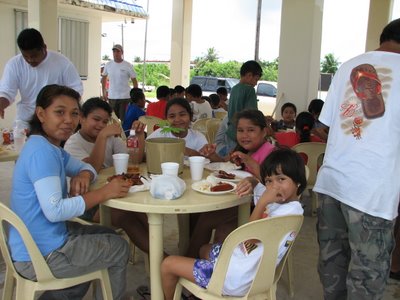 After luch it was time to get back to work. We finished painting the substation, effectively removing ALL of the graffiti. We also finished up cutting the grass and clearing the brush, then we spent a considerable time picking up the yard waste afterwards. 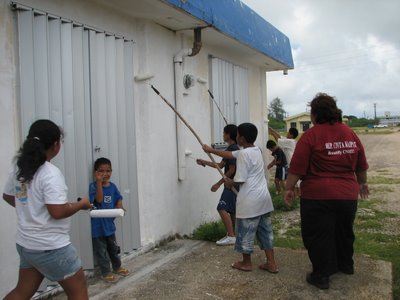 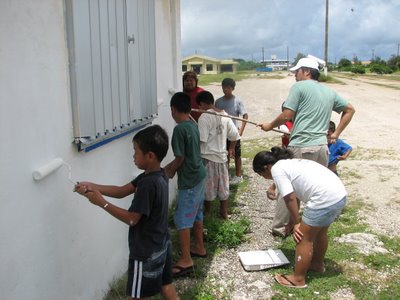 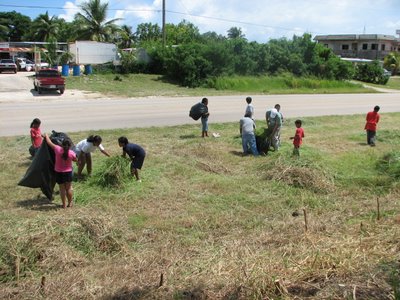 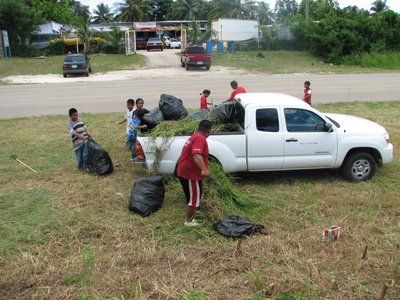 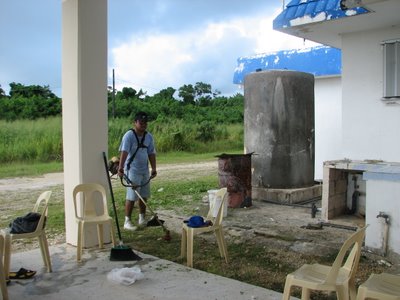 What a difference a day makes! At the end of the day we were all a little sunburned and really tired. Rep. Cinta Kaipat bought ice keiki for the kids to thank them for a hard days work.

This weekend's activites were planned and supoorted by Rep. Kaipat's Office and the Marianas Resource Conservation & Development Council. Most of the volunteer labor was provided by MOVER and students from Koblerville Elementary.
Posted by Volunteer Guy at 8:33 AM

Kudos to Congresswoman kaipat and to all the volunteers. Sorry that the Parole boys and girls were a "No Show" but we are ready for this weekend rain or shine. Likewise, we will do a follow-up of the Kobler project the following weekend or following week.