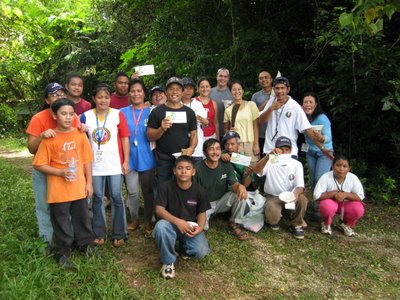 This past Sunday, Beautify CNMI! volunteers from MINA, MOVER, Marianas RC&D, DEQ, and Representative Cinta Kaipat's Office cleared and remarked the Landeran Tangke Trail in Marpi. This weekend's activity was lead by Laura Williams of Division of Fish & Wildlife (DFW). 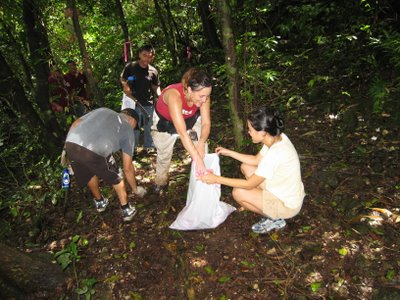 The path was slightly overgrown, so volunteers remarked the trail with pink flagging tape and cut back some of trees that were growing over the trail. The volunteers also picked up all of the trash along the trail. The trail is completely pristine right now. If people stop littering up there, we'll be able to keep it like that.

The Landeran Tangke Trail was originally created by CNMI Forestry about 20 years ago and was improved just a few years ago by DFW. Recently DFW created and published a trail guide in four languages: English, Chinese, Japanese, and Korean. The trail guides can be picked up at the American Memorial Park museum.

The trail guide will take you through the different points of interest along the trail. The trail goes in a counter clockwise loop, so you finish your hike where you started. You can expect to see most of Saipan's forest bird species on your hike. You'll very likely hear a Marianas Fruit Dove, and if you get lucky, you might even get to see one. You might also run into a coconut crab or a monitor lizard. I didn't see any, but I did find this guy clinging to a tree, Gehyra oceanica, the "Big Daddy" gecko of the CNMI: 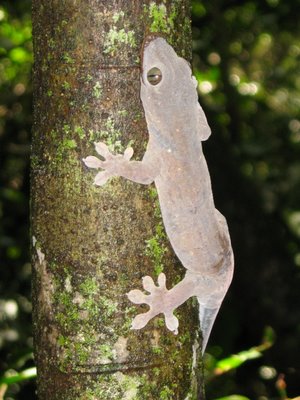 Throughout the trail you will see lots of sharp rocks. Although they are now atop one of the higest points in Saipan, these limestone rocks were formed during the days when Saipan was underwater. 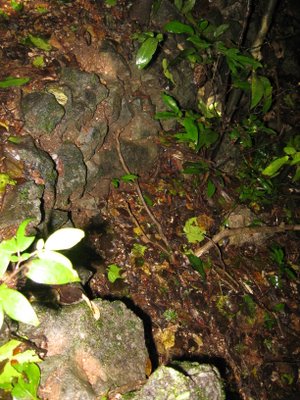 During the pre-World War II days, Japanese soldiers used these rocks as hiding places and fox holes. There are several well camoflauged fox holes along the trail. They are over 60 years old now, but with a little imagination you can envision a Japanese soldier hiding inside.

As we were finishing up our trail clearing activity, a vanload of Japanese tourists pulled in to the parking area. The local company that takes the tourists here charges them $65 for a day long outing that includes a hike, some siteseeing, lunch, snorkling, and time at their spa (it costs $40 for just the hike). The trail is inside the Saipan Upland Mitigation Bank, so this is a perfect example of environmental protection providing economic benefit.

It is also a perfect example of how lucky we are to live in such a beautiful place. While tourists have to pay thousands of dollars to fly here, stay at a hotel and then for a guide to take them on a nature hike, the people living on Saipan get to visit the Landeran Tangke trail for free.
Posted by Volunteer Guy at 2:55 PM