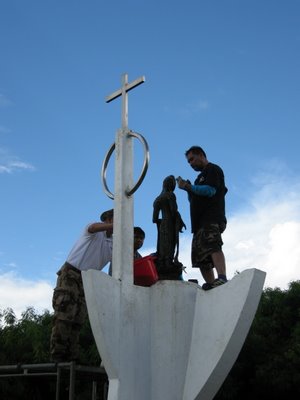 Yesterday afternoon I participated in the cleanup of the peace memorial atop Suicide Cliff organized by Willie and Aya Matsumoto of Pacific Eagle fame. I didn't count heads, but there were about 20-30 volunteers. In addition to the Japanese volunteers, there were representatives from HPO, MVA, DNLR, and Cinta Kaipat's Office. 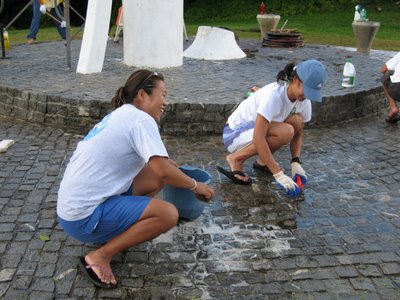 Volunteers cut the grass, picked up trash, painted the railing on the edge of the cliff, washed all of the memorials with a pressure washer, shined the brass, and generally cleaned the place up. Reporters from both newspapers and a camera from MCV came to report on the activity. 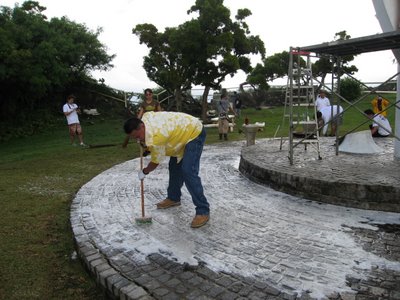 We were all feeling great as we finished, having come together to clean up one of Saipan's most popular tourist spots, only to be brought down to the lowest of lows when we discovered that one of the volunteer's cars had been burglarized. The thief was hiding in the tangan tangan trees and when no one was looking, ran over to the car, smashed in a window, stole a camera and a bag and ran back into the cover of the jungle. Even though there were 30 or so people up there, no one saw a thing.

When the police came he explained to us how the thieves operate and told us that there is an element of our society that does this type of "work" for a living. The officer went on to tell us that pretty much ALL of our tourist spots have this problem.

I was enraged, but more than anything I was embarrassed. Here is a group of people, born not here, but somewhere far away, donating their money (and more importantly their time) to make these islands a better place to live and visit and then this happens.

With that said, I'd like to publicly THANK Willie and Aya for their commitment to these islands and to ask them to not become discouraged by the actions of a few. The majority of the people on this island are as angry and disappointed as you are. To prove this, I am inviting the entire Beautify CNMI team (yes, that means you) to participate in the cleanup of the Last Command Post being organized by Willie and Aya for this upcoming Saturday. (I'll send out more details on Monday)

Thanks for allowing me to vent,

P.S. The type of behavior exhibited by the thieves can not be tolerated if the CNMI is serious about becoming a world class vacation destination. If you witness this type of activity, please do not hesitate to call the police at 911 or crimestoppers at 234-7272.
Posted by Volunteer Guy at 8:11 PM