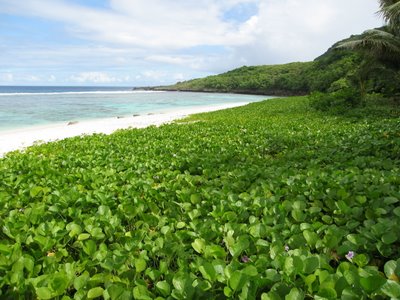 Mariana Islands Nature Alliance (MINA) has adopted Wing Beach as part of Beautify CNMI! and DEQ's Adopt-a-Beach program. They clean up the beach on the third Saturday of every month. November 2006 was the fifth month of consecutive cleanups.

Wing Beach is one of Saipan's hidden jewels. It is on the north end of the island, just past Marianas Resort. Heading north along the road to Marpi, there is a boonie road on the left hand side called Wing Beach Road. Follow it to get to either one of the two Wing Beach entrances. 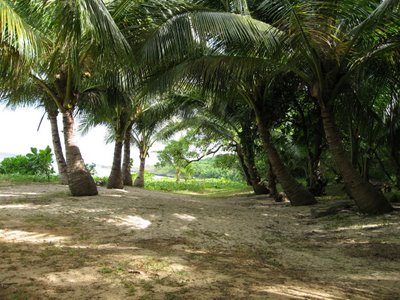 The more popular beach entrance is at the end of the road. That is where tourists swim out of a naturally occurring channel to go diving. It is also where a lot of locals bbq on the weekends. 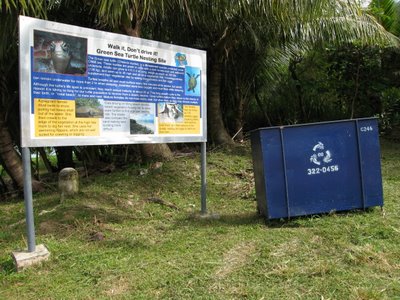 As part of their beach adoption, MINA is paying for weekly trash pickup at Wing Beach. They secured a donation to cover the cost of pickup for one year. The trash container can be found next to the "Walk It, Don't Drive It" sign at the end of the boonie road.

A few years back, Coastal Resource Management Office blocked off vehicular traffic to Wing Beach and put up these educational signs. Driving on the beach drips oil on and impacts the sand, kills vegetation, and increases erosion rates. Vehicles can also crush turtle eggs buried in the sand. Sea turtles are a culturally important species for locals and an economically important species for the local dive industry. Managing this resource by banning vehicular traffic plays an important part in protecting our local heritage and economy.

It took literally three months of cleanups and the institution of regular trash pickups to get the litter problem under control at Wing Beach. In October 2006, the fourth month of MINA's adoption, the amount of litter on the beach was almost zero. This allowed MINA to start cleaning up the road leading into Wing Beach. They cut the overgrown grass and removed litter that had been hidden along the side of the road for years. 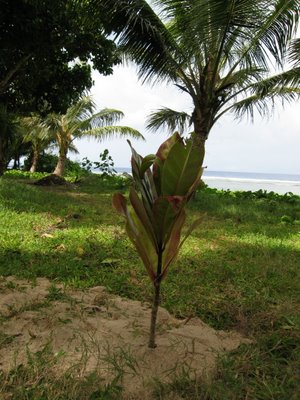 In November 2006, with the litter problem on the beach and along the road under control, MINA, under the supervision of CNMI Forestry, started to remove invasive vine species. They also started planting native forest species along the shoreline to replace the non-native tangan tangan.

Wing Beach is well on its way in becoming one of the nicest beaches in all of Micronesia. Thanks to MINA, it is also definitely now the cleanest.

MINA did not accomplish this alone. Although they were the original adoptees of Wing Beach, they have since been joined by Marianas Resort as co-adoptees. Also, over the course of five months, they have recruited volunteer help from the Marianas Resource Conservation & Development Council, Church of Latter-day Saints, Saipan Grand Hotel, Top Fashion, Saipan Southern High School, Marianas High School, Representative Cinta Kaipat's Office, CNMI Forestry and Marianas Visitors Authority.

It is the hope of Beautify CNMI! that other adopting groups can replicate MINA's success at other locations throughout the CNMI. The most pressing issue at most locations around our islands is the litter problem. As MINA has demonstrated, it can take several months just to get this problem under control. But once the litter problem is under control, that will allow the adopting groups to tackle other problems, like habitat restoration, erosion, and runoff.

MINA has cleaned Wing Beach during the following months:

A hearty congratulations to Beautify CNMI's proud partners MINA and Marianas Resort for leading the clean-up today. Many will benefit from your leadership.

And, of course, another huge thanks to ALL our *wonderful* scores of volunteers listed on the main page who helped out today and all those other weekends ago! Your fine efforts have paid off BIG time and you set a bright example for others to emulate.

GO TEAM! Let's continue to infect the rest of the CNMI with the "Beauty Virus."

This article was printed in the Saipan Tribune on Thanksgiving Day 2006. Woot!

Excellent! This is a great post! Here i found many tips how to take care of my teeth and families. TEETH WHITENING IN HOUSTON, TX Teeth Whitening In Houston,TX,To figure out a solution of this issue, a technique of teeth whitening can be used, so that the white color of the teeth,best.