The Marpi area of Saipan has become notorious for petty crimes, especially crime against tourists. Criminals hide in the jungle near the spots where tourists park and then run out to unwatched cars, smash, grab, and run back into the jungle. No one ever sees a thing. The tourists don't usually find out what happened until it is too late. The thieves disappear within seconds back into the jungle along the numerous jungle trails up in Marpi.

Even Beautify CNMI! is not immune to this. During our cleanup of the Suicide Cliff Outlook a while back, somebody smashed in a car window and stole a camera and a wallet. There were 50 people up there cleaning, but nobody saw a thing.

Crime is always a difficult thing to deal with. No matter how many police you put on the streets or how much money you spend on prevention, there will always be crime. The best you can hope to do is to reduce crime. The local government is always strapped for cash and since there is no funding mechanism to charge people an entrance fee to visit Marpi's tourist sites, there is no money available for 24 hour security (there is security during part of the day at some of the tourist sites).

Crime against tourists is probably the worst type of crime the CNMI could have. They are our life blood. We don't want to develop a reputation as a place hostile to foreigners. So how do you reduce crime in one of Saipan's most popular tourist spots when there is no budget for security?

Marianas Visitors Authority (MVA) and Department of Natural Lands & Resources (DNLR) came up with an ingenious way to make it more difficult for thieves to operate in Marpi. 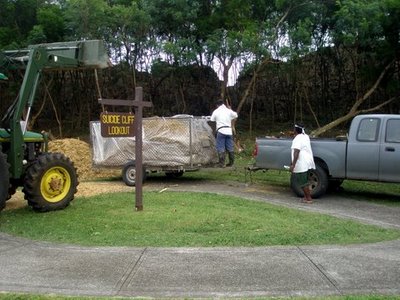 The thieves were able to operate successfully because the parking area was literally feet away from thick jungle. Even while standing in the parking lot on the edge of the vegetation, it was impossible to see in more than a few feet. The thieves were able to wait at the edge of the trees, run only a few feet to an unwatched car, smash, grab, and then disappear back into the jungle. The whole thing probably took under a minute. 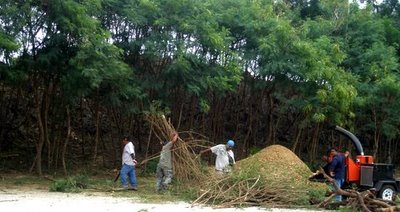 MVA and DNLR came up with a plan to thin out the trees near the parking area so that you could see at least 50 meters into the jungle, thus making it more difficult for thieves to hide. 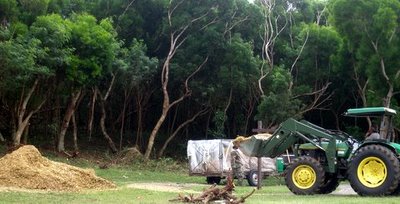 They did not clear cut the area, they only cut away low lying branches and removed understory vegetation. They left all of the canopy species standing.

Volunteers from Department of Corrections and Rep. Kaipat's Office joined CNMI Forestry, Parks & Recreation, and Agriculture for a day's worth of cutting and chipping, thinning out a 50 meter perimeter around the Suicide Cliff lookout area. Any thief wanting to operate in the same manner as before the thinning had better be a very fast runner.

This project probably won't stop the crime in Marpi, but it should make it a lot more difficult for criminals to perpetrate a smash and grab. Not only will it make it more difficult to commit crimes, it also looks really nice! The thinned out trees are very inviting; It is a nice addition to an already beautiful spot.

Thank you MVA and thank you DNLR for coming up with this plan!

Thank you Cinta Kaipat and thank you Department of Corrections for providing volunteer labor!
Posted by Volunteer Guy at 9:16 AM