During tomorrow's business meeting of the US Coral Reef Task Force in Washington DC, the Executive Director of the Coral Reef Alliance will be presenting Recommendations for Coral Reef Conservation to the Obama Administration and the 111th Congress. This document represents a collaborative, cross-NGO set of recommendations for swift and decisive action by the Obama Administration and Congress for responding to the global coral reef crisis.

Two Micronesians have attached their names and their organizations to this call for action. One is Ignacio V. Cabrera, Chairman of the Friends of the Monument. The other is yours truly, signing as the Executive Director of Beautify CNMI.

Here is the letter, posted in its entirety: 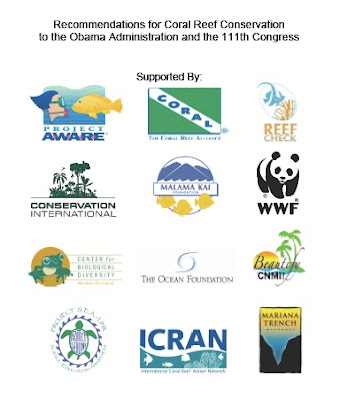 Recommendations for Coral Reef Conservation
To the Obama Administration and the 111th Congress
Healthy coral reefs are the largest living structures on the planet and the second largest storehouse of biological diversity. These highly productive ecosystems are economically valuable, with reef-based tourism generating over $1.2 billion each year in the Florida Keys alone. Coral reefs provide coastal protection, food, and income, supporting the livelihoods of approximately 100 million people around the world.

However, coral reefs in the United States and worldwide are declining at an alarming rate. Unless we take immediate action, we could lose up to 70 percent of the world’s coral reefs by 2050. Human activities have damaged coral reefs to the point of being the most threatened ecosystem on Earth; they are currently teetering on the edge of destruction. Fortunately, three major human impacts on reefs—climate change, overfishing, and pollution—are reversible if we act now. As noted undersea explorer Dr. Sylvia Earle has stated: “If reefs are in trouble, we are in trouble.”

We are encouraged by indications that the Obama Administration and the new Congress will establish a serious commitment to coral reef conservation through the appointment of Dr. Jane Lubchenco–a distinguished ocean scientist with a strong track record in ocean conservation–to lead the National Oceanographic and Atmospheric Administration (NOAA). We also see a tremendous opportunity for the United States to continue its leadership role in helping to reverse the downward spiral of coral reef destruction and ensure the health and survival of these invaluable resources for future generations.

We urge the Administration to adopt the strongest possible measures for the protection and conservation of coral reef ecosystems and stand ready to partner with the new administration in designing and implementing an effective and global coral reef conservation strategy. Such measures could include the following:

• Fund and lead domestic and international coral reef conservation efforts through NOAA, USAID, EPA, the Department of the Interior, and the State Department;

• Support NOAA’s priorities in reducing impacts to coral reefs from fishing and land-based sources of pollution;

• Effectively conserve at least 30 percent of coral reef and reef-associated coastal resources in U.S. states and territories using marine managed areas over the next eight years; and

• Provide more support for ocean education and citizen-science programs to create an educated public that understands and is committed to ocean conservation.

Reauthorize the U.S. Coral Reef Conservation Act of 2000
The reauthorization of the Coral Reef Conservation Act must be a priority for the 111th Congress during 2009. The act was established in 2000 to preserve coral reef ecosystems, promote wise management, and obtain better information about
the current condition of coral reefs. As a result of this act, millions of Americans have been educated about the coral reef crisis, research has documented the threats and damage, and large areas such as the Northwest Hawaiian Islands have been protected. It is critical to continue this work to give reefs any chance to survive and to expand similar strategies around the world by authorizing activities for international coral reef conservation.

Support passage of the Federal Ocean Acidification Research and Monitoring Act
Increasing CO2 in the world’s atmosphere is taking its toll on the oceans by increasing the acidity of sea water, which in turn threatens the stability of the marine food chain and the ability of corals to build reefs. Essentially, as the oceans increase in acidity it becomes more difficult for animals such as scallops, clams, crabs, plankton and corals to build their shells or skeletons and slows the development of their larvae. The Federal Ocean Acidification Research and Monitoring Act focuses federal research on rising ocean acidity and establishes a comprehensive research and monitoring program within NOAA.

Enact Meaningful Reductions in Carbon Dioxide Emissions that Target CO2 Concentrations to Stabilize at Levels Climate Scientists Determine are Necessary
In 2007, the Intergovernmental Panel on Climate Change concluded that deep reductions in greenhouse gas emissions must be prioritized. Without action, atmospheric carbon dioxide (CO2) concentration is expected to exceed 500 parts per million (ppm) between 2050 and 2100, and global temperatures will likely rise by at least 2°C. Under these conditions, global warming and ocean acidification are predicted to damage and kill most reefs. We urge the federal government to take aggressive action to reduce emissions now–action that can serve as a benchmark for international leadership.

Fund and Lead Domestic and International Coral Reef Conservation Efforts through NOAA, USAID, EPA, the Department of the Interior, and the State Department
With the recent addition of the Marianas Trench, Pacific Remote Islands, and Rose Atoll Marine National Monuments, ensuring adequate capacity for management and monitoring of these and other domestic coral resources has never been more critical. The United States should also provide increased leadership in international and national coral reef conservation efforts. As increasing areas of reefs are damaged, tens of millions of people around the world will become desperate for food in countries that are critically important for global stability. Stopping coral reef destruction now and investing in conservation is an investment in global security.

Support NOAA’s Priorities in Reducing Impacts to Coral Reefs from Fishing and Land-based Sources of Pollution
Along with large-scale threats resulting from climate change, NOAA has identified land-based sources of pollution and impacts from fishing as priority areas for coral reef conservation. Land-based sources of pollution and poor water quality are recognized as two of the most important factors driving coral reef decline. In addition, rapid human population increases, growth of export fisheries, use of more efficient fishery gear, expansion of destructive fishing techniques, and inadequate management and enforcement have led to the depletion of not only keystone reef fish species, but also associated species and ecosystems. For these reasons, we recommend expanded funding and legislative capacity for NOAA to better manage recreational and commercial fisheries and land-based sources of pollution to meet coral reef conservation objectives.

Effectively Conserve at Least 30 Percent of Coral Reef and Reef-Associated Coastal Resources in U.S. States and Territories Using Marine Managed Areas over the Next Eight Years
Full protection of at least 30 percent of the planet’s coral reefs from human activities is a reasonable and realistic management goal that will allow reefs to thrive. On November 5, 2005, then President Tommy E. Remengesau, Jr., of Palau called on his peers to join him in the Micronesia Challenge to effectively conserve 30 percent of near-shore marine resources within marine protected areas by 2020. Similarly, Caribbean governments have called for 20 percent protection of marine and coastal habitats by 2020 in the Caribbean Challenge. We ask for the United States to join the many nations that recognize the importance of marine managed areas for effective coral reef conservation and provide the staff and funding needed for active research, monitoring, enforcement, and local management.

Provide More Support for Ocean Education and Citizen-Science Programs
By becoming educated about the value of coral reefs and threats to their survival, the public can become strong advocates for conservation and sustainability. One of the most effective means of education is a citizen-science program that turns
hands-on experience into knowledge. As a leader in marine conservation, the new administration should provide increased support for ocean education and citizen-science programs in the United States and internationally.

I highlighted what I consider to be the most significant recommendation, at least from my little rock in the sun. I think it is significant that two Micronesians are challenging the President of the United States to meet what one day could become the "American Challenge."

The Micronesia Challenge, which seeks to effectively conserve 30% of our nearshore resources and 20% of our terrestrial resources by 2020, has received lots of attention over the last several years, including former President Tommy E. Remengesau, Jr of Palau, the man behind the Micronesia Challenge, being recognized by Time Magazine as one of the "Heroes of the Environment" in 2007.

Palau, the Marianas, and the rest of Micronesia are Small Island Nations, or as I prefer to call them, Large Ocean Nations. Our populations are small and our conservation budgets are smaller, but every single day we live with the environment. Unlike large developed nations that have a concept of the environment as someplace far away (i.e. Papahanaumokuakea Marine National Monument or Arctic National Wildlife Refuge), the environment for Micronesians is literally in our front yard. Local people catch their dinners on the beach 50 meters from my apartment. If we don't act as good stewards of our environment, we don't eat.

The environment in Saipan is central to our economy. Not only do we depend on healthy populations of fish to feed our families, but our economy is heavily dependent on tourism. Additionally, the environment, our ocean, our beaches, and our green forests, are consistently cited as the main attractions for tourists in the Marianas. Those tourists spend money and create jobs, which in turn generates tax revenue to support all those people in government jobs.

These ideas deserve to be explored further, which I will do in the near future. This post was really just meant to post the letter.

I hope that the Obama administration takes these recommendations seriously and I hope that he recognizes and considers the Large Ocean Nations that will live with his decisions. As with Climate Change, we'll feel the effects of poor policy sooner and with more intensity than the richer, larger, more developed nations.
Posted by Angelo Villagomez at 11:01 AM