Former First Lady Thanks Friends of the Monument 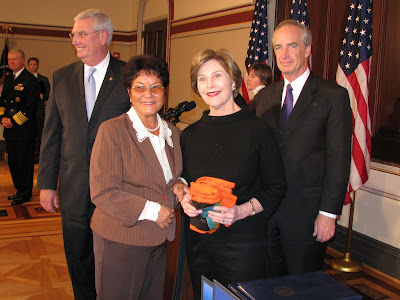 SAIPAN, Northern Mariana Islands – Former First Lady Laura Bush recently wrote to the Friends of the Monument thanking them for their role in supporting the creation of the Marianas Trench Marine National Monument.

The letter, embossed with the official White House seal reads, “We are pleased that you joined us at the White House for the signing of the proclamation to create the Pacific Marine National Monuments. Your gifts will always remind us of your support throughout the process that led this special occasion.”

The former first lady added, “Conservation and protection of our ocean resources is vitally important to our nation and the world. I am proud of the accomplishments of my husband’s Administration to protect America’s oceans. He joins me in sending best wishes to your organization for future success in advancing marine conservation.”

The letter from the former first lady included an autographed photo of her and former President George W. Bush.
Friends of the Monument’s Angelo O. Villagomez said of the letter, “I am really proud of our people. We are showing the world how local actions can have global consequences. Even the former President of the United States and his first lady know about our work here.”

The Friends of the Monument were the main proponents for a marine monument in the Marianas. When local elected leaders were not receptive to the idea of a marine monument, the Friends started a petition drive and collected over 6000 signatures from local residents. They also gained endorsements from the business community and prominent community leaders.

The islands’ political establishment ultimately supported the monument. According to a statement issued by Governor Benigno R Fitial on the day of the designation, “I welcome President Bush's historic announcement establishing the Marianas Trench Marine National Monument…Over the past few months, I have been actively engaged in discussions with the White House Council on Environmental Quality regarding the objectives and scope of the proposed monument. I have been joined in these discussions by President Pete Reyes of the Commonwealth Senate and Speaker Arnold Palacios of the Commonwealth House of Representatives.”

When asked about what he was going to do with the letter, Friends of the Monument’s Ignacio V. Cabrera said, “I’m going to hang it on my wall at home so that I can remember all we have accomplished.” 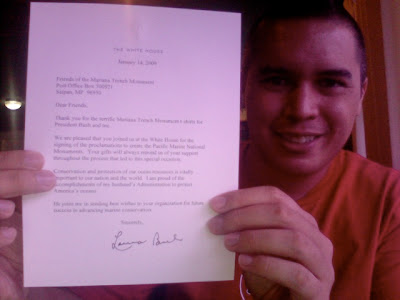 Silly grin: Friends of the Monument's Angelo Villagomez and the letter from Laura Bush.

Friends of the Monument officers Agnes M. McPhetres, Ignacio V. Cabrera, and Angelo O. Villagomez were on hand to witness the historic monument declaration this past January.

The Friends of the Monument formed in the Spring of 2008 to express the voice of the local community and consists of a cross-section of indigenous and resident people of the Commonwealth of the Northern Mariana Islands who are dedicated to the conservation, preservation and protection of marine flora, fauna and geological features of the oceans; and the creation and proper management of a Marianas Trench Marine National Monument.

More information on the Friends of the Monument and the Marianas Trench Marine National Monument can be found at http://marianamonument.blogspot.com.
Posted by Angelo Villagomez at 8:49 AM