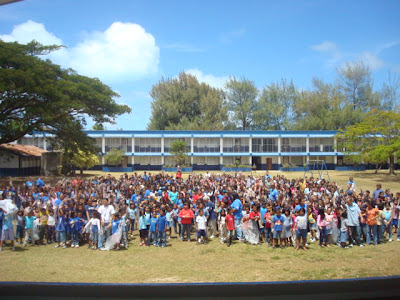 Garapan Elementary School received $100 for the photo they submitted of their entire student body right before cleaning up their campus and the surrounding neighborhood. They won the contest for the photo with the most volunteers.

“I told some of the staff that we won and they were really proud,” remarked Dale Roberts, Vice Principal of Garapan Elementary.

In the contest to take a photo of the biggest pile of collected garbage, San Vicente was declared the victors. ACT President Betty Miller was on hand to accept the $100 on behalf of the students. 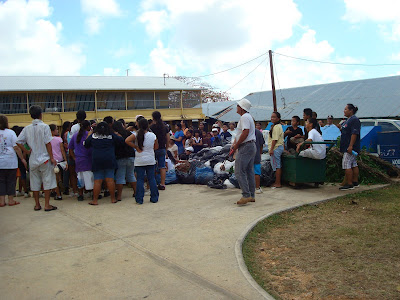 “We had a lot of support from the parents on our cleanup day and they deserve a lot of the credit,” said Miller about winning the contest category.

Each of this year’s 61 participating groups also had their names put into a random drawing to win $100. William S. Reyes 5th grader Shizuka Takayama pulled the name of the Children’s Developmental Assistance Center during a press event at the Marianas Visitors Authority office on Wednesday.

“Everyone who participated in this year’s island-wide cleanup deserves a hearty thank you,” said Angelo Villagomez of Beautify CNMI. He added, “the Kramis family also deserves a big thank for their generous donation making these prizes possible.” 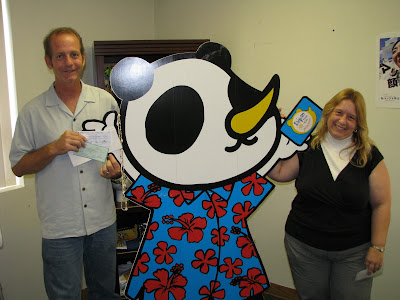 Award winners: Roberts and Miller with the $100 checks for their schools. Saipanda is also pictured.

The 2009 island-wide cleanup had the participation of 4,140 volunteers from 61 groups and over 13.5 tons of litter was removed from the streets and beaches of Saipan. The Rotary Club of Saipan, Division of Environmental Quality, Marianas Visitors Authority, and Marianas Tourism Education Council coordinated the event.
Posted by Angelo Villagomez at 2:46 PM