At about 4:30 PM on Thursday afternoon towards the end of the monthly Beautify CNMI meeting, Joe Kaipat asked those in attendance if they would be interested in doing a cleanup after the Liberation Day Parade. More specifically, would the members be interested in following the tail end of the parade to hand out garbage bags and pick up litter?

We all thought it was a great idea and with less than 48 hours before the start of the parade set out to organize ourselves. Did I mention the Thursday workday was over and Friday was a holiday?

We started off by securing one of the Division of Environmental Quality trucks and calling the Division of Parks & Recreation and the Mayor's Office to see if we would even be allowed to do this. Parks & Rec had no problem and gave us their blessing. The Mayor's Office told us to call Jack Omar at Emergency Management Office. Jack told us to call Felipe Atalig, who told us to come to the pre-parade meeting starting right now at the Liberation Day festival grounds.

Once at the meeting we filled out an application and got the approval of the parade committee. Then they set about assigning the parade order, but we didn't have to stick around for that because we were going to go last!

We needed to announce our plans in the media, so we ran over to the Saipan Tribune office and asked one of the reporters to write a story. Even though it was past the normal deadline to submit a story, they published an article in Friday's paper.

Then we set about recruiting volunteers and asking for support. DEQ provided a truck and rubber gloves, I donated garbage bags, bottled water and McDonald's cheeseburgers, Pacific Eagle gave us a truck and volunteers, Laurie Peterka gave her truck and drove, and Artman gave us a 20 foot dumpster and paid for the trash removal. We also used the Beautify CNMI trash trailer built with funds from the Bank of Guam. 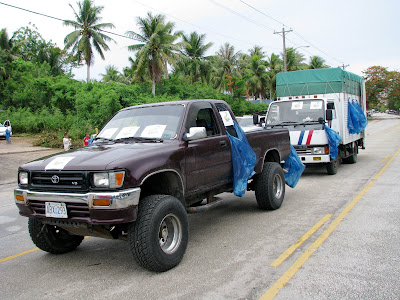 I also donated 25 color copies of the Beautify CNMI logo and website, which we used to decorate the trucks.

With everything set, our plan for the parade was simple enough. We would hand out garbage bags and collect trash along the parade route. 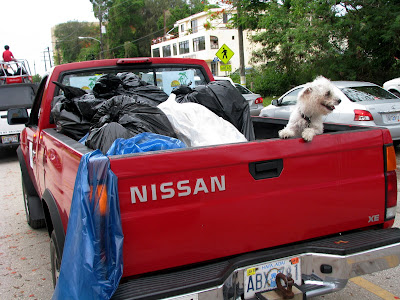 Oreo helped out from the back of the truck donated by Representative Waki. I was amazed at how many people on the parade route knew his name. He might just rival Brad Ruszala in popularity. I had no idea!

While the thought of being an unpaid garbage man for a day crossed my mind, I found our event to be a great experience. As we walked the streets asking people if they needed a garbage bag, you could see a light go on, "Oh yeah, a garbage bag. Now I won't have to leave my 50 empty beer cans and plastic plates under this tree."

After we handed out the bags, instead of leaving all their trash on the road, people would start cleaning up their area. Entire families would pitch in to help. It was repeated every ten feet and was amazing to watch. 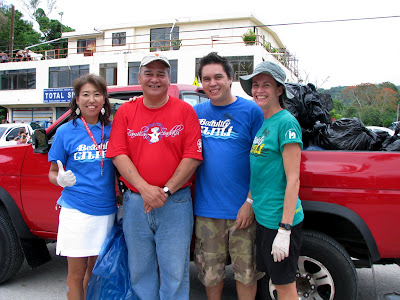 I loved all the cheers of "Beautify CNMI!" and the "thank yous" and "good jobs" we got along the parade route. I'm sure that's par for marching in a parade, but it has been decades since I marched in a parade (unless I was dressed as a giant dog and making $6.10/hour).

At the end of the parade route we did a U-turn and brought the trash back to the trash bin on the Aldan property next to Star Water.

On the way back down Beach Road I noticed that there was hardly any litter. Where there was trash, it was sitting by the road in one of our blue garbage bags. 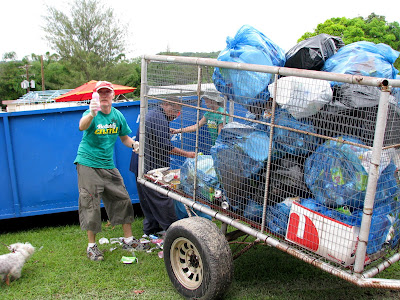 It only took us a few minutes to unload the trash into the dumpster provided by Artman. I don't know what we would have done without their help. 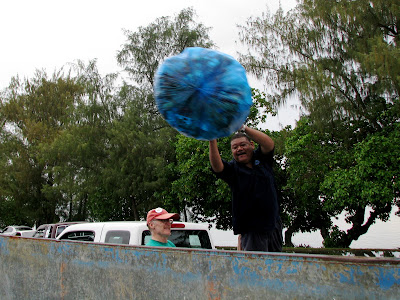 After unloading the trash from our trucks, the Ogomoro family, who was barbecuing at that spot, offered us some of their food and their beer. 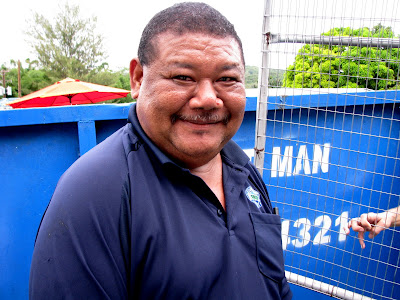 Over beers we all decided that this was going to have to become an annual event. 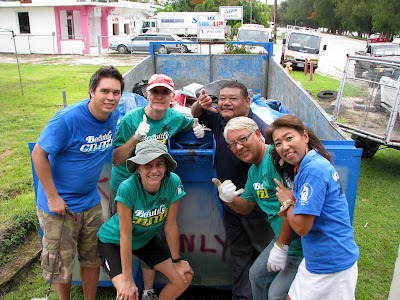 Posted by Angelo Villagomez at 8:47 PM

Very impressive publication here. Moreover as I see, this question is very actual for many people indeed. Personally I totally agree grademiners reviews with author opinion about this subject and I think that it would be really interesting to create such discussion with other this website visitors. Anyway thanks a lot one more time for the great and informative publication. And I will definitely be waiting for more such nice posts like this one from you. Kind regards, Peter Rickson.

Dumpster rentals are very helpful for a variety of situations. Sometimes they’re accustomed to clean up after demolition debris, in other cases they’re rented for community clean ups for beaches. They’ve seen from stock-piled garbage and messy events this link…..

Such a very useful article. Very interesting to read this article.I would like to thank you for the efforts you had made for writing this awesome article

This is a great article, that I really enjoyed reading. Thanks for sharing.
friv games
superfighters