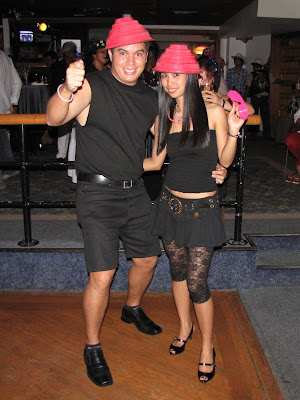 How does a respectable candidate for Mayor of Saipan dress for a themed fundraiser? Like Devo, that's how!

Pacific Islands Club Saipan put on quite an event last night. I knew it was going to go well when I started getting frantic emails, texts, and phone calls from people trying to buy tickets. The word was spreading that we sold out.

Edz and I decided at the last minute that we were going to go as Devo. I had to buy new black shorts and a t-shirt (only $5 each at Roshi's!), but Edz already had plenty of black clothes to choose from. We made our hats from those things you put underneath a flower pot. We bought four different sizes, cut holes in the middle so are heads would fit and glued them together with crazy glue. A few coats of spray paint and we were ready to bring Devo back! 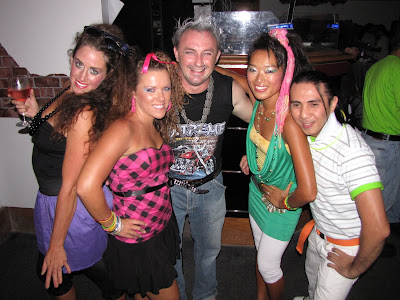 When PIC decides to throw a party, they go all out. The clubmates and staff who were working the party were all decked out in costumes and when you walked through the door you were given sunglasses and glow in the dark necklaces and bracelets. They said there was going to be food, but they didn't mention that there was going to be a buffet. If the chefs at PIC could teach the rest of the world to grill a pork rib, the world would be a better place. Not only was there a big spread with all types of bite sized goodies, but waiters were walking around with hors d'oeuvres, too. 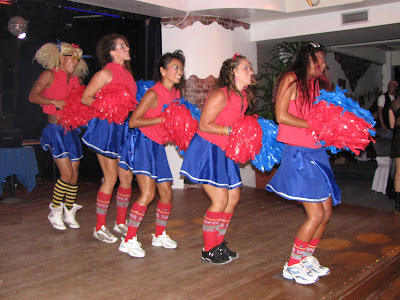 The entertainment was split between a live band, a DJ, and whatever you want to call what it was the club mates were doing on stage. Last night I kept waking up from a nightmare where Jay was bouncing around in a blonde wig and cheerleading outfit. Please God, don't make me relive that ever again.

There were several contests, drawings, and prizes. Some of the prizes were Beautify CNMI t-shirts that I brought to be handed out, but the prizes also included free brunches, water park passes, hotel stays...even hotel stays in Guam!

As luck would have it, Edz' raffle ticket was the second to last one drawn in the raffle. James Eller's was last. Instead of simply giving out the prizes, they were forced into a video game challenge; whoever got the highest score in a game of Ms. Pacman would win the better prize. 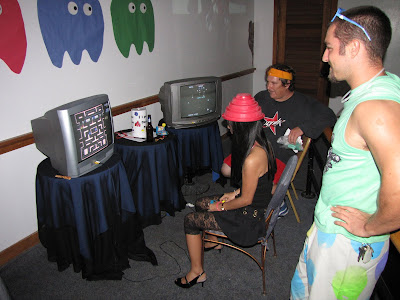 I didn't want to tell James, but Edz has a lot of practice playing Pacman (which is essentially Ms. Pacman without the bow). There is an arcade at Godfather's and she challenges the customers to play her when it is slow or after her shift ends. 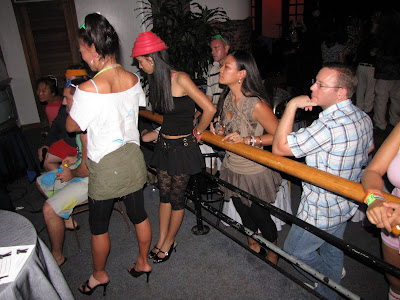 The crowd was really into it. This was probably the biggest video game challenge the island of Saipan has ever seen. 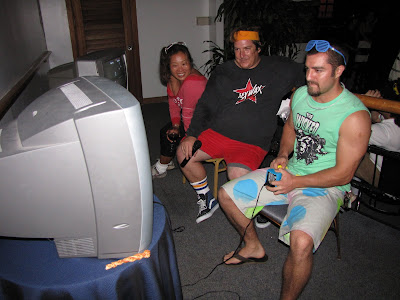 But James never really stood a chance, although he put up a valiant effort. Edz took home the championship without hardly even trying. 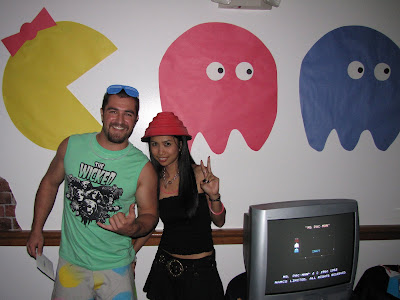 For second place James received a waterpark pass for two to PIC and Edz took home a one night stay at Pacific Islands Club Guam. There was only one problem: Edz can't go to Guam without a US Visa. Doh!

We traded our gift certificate for one free night on Saipan.

At the end of the night Kieran Daly, General Manager of the Pacific Islands Club, announced they had raised over $2500 for Beautify CNMI! and PAWS...each!!!! I nearly hit the floor when I heard. $2500 is enough money to pay for cleanups for a year. I never expected such a generous donation, especially after all the advertising they did and all the money they spent on staff, food, and drinks.

More photos are posted at the Beautify CNMI Fan Page on Facebook.
Posted by Angelo Villagomez at 8:36 PM