Lights off to promote Earth Hour this Saturday

On March 27 at 8:30pm the Division of Environmental Quality encourages CNMI residents and businesses to turn their lights off for one hour, in support of the World Wildlife Fund (WWF) sponsored Earth Hour event that seeks to raise awareness and promote global action on climate change.

In partnership with American Memorial Park, the CNMI Earth Hour Team is hosting a candle-lit commemoration of the event as the park lights are switched off this Saturday from 8:30pm to 9:30pm. The public is invited and encouraged to attend.

In its first Earth Hour event, the CNMI will join more than 115 countries and an expected billion people world wide to raise awareness about the risks and causes of climate change as well as asking for action from world leaders on it.

Being an island nation, the Northern Mariana Islands stand to be greatly affected by rising sea levels, increasing ocean temperatures, ocean acidification, and increasing occurrences of drought and large storm events. Climate change would impact local economy, infrastructure, and food production. Participation in Earth Hour will allow the CNMI to add its voice to those around the world calling for leaders to make action on climate change a priority.

More information can be found at earthhour.org or at the local CNMI Web site: earth-hour-northern-mariana-islands.blogspot.com. (PR) 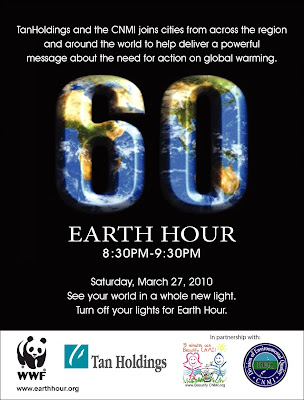 Posted by LPinSaipan at 8:28 AM