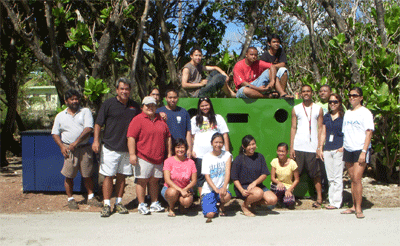 In celebration of the ongoing cleanup efforts at Marine Beach by Kagman High School Marine Biology Club, the Mariana Islands Nature Alliance (MINA) and Docomo Pacific surprised the group on Saturday with a new set of trash and recycling bins for the beach.

“These kids have been cleaning up Marine beach every month for a year now. That to me is a commitment worth talking about,” said Joe Kaipat, Division of Environmental Quality Cleanup Brigade coordinator. Kaipat told MINA about the Club’s adoption of Marine Beach shortly after the Adopt-a-Bin program was launched.

Kaipat said the 30-member Club had been interested in taking part in MINA’s Adopt-a-Bin program to limit the amount of picnic waste left on the ground. Picnic waste eventually washes to the shoreline to become marine debris. The Club picks up 300 pounds of trash on average each month from Marine Beach, Kaipat reported. According to the Club, the worst thing found during a cleanup was a car battery, a highly toxic form of marine debris.

Although the Club met MINA’s requirement of conducting at least two clean ups a year to Adopt-a-Bin, it lacked funding to pay $1,000 for trash hauling services. In response, local businesses were solicited to partner with the Club. A similar partnership was successfully galvanized between the Susupe Hi-5 Basketball Team and US Representative Gregorio C. Kilili Sablan for a set of bins at Kilili Beach.

Last week, James Nelson, Docomo Pacific general manager, responded to MINA’s call. Nelson said he was impressed by the Club’s volunteerism and commitment to the environment and that his company would be happy to partner with the Club to Adopt-a-Bin.

After seeing the new bins in place on Saturday, Nelson surprised MINA in turn, by saying that Docomo Pacific would adopt a second bin for Saipan’s western shore. MINA is now seeking a partner for that bin. If you are interested in putting your name on the map of MINA’s Adopt-a-Bin program, contact 233-Reef, or mina@minapacific.org.
Posted by LPinSaipan at 10:19 AM