Well over a thousand take part in coastal cleanup 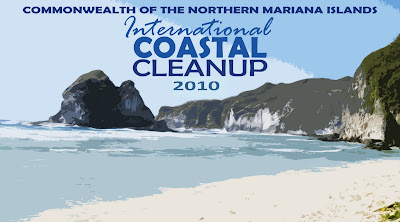 Here's a report from the Saipan Tribune

Over a thousand government and private sector employees, organizations, their families and students are taking part in environmental protection by joining the international coastal cleanup that began yesterday and continues today on Saipan, Tinian, and Rota.

“Even though it's payless payday today for us, we still want to volunteer our time and effort to keep our island clean. We don't need to get paid in order for us to protect our environment,” said Jocelyn Aldan-Kapileo, an employee at the Department of Public Lands.

DPL was one of the agencies and groups that began their cleanup yesterday despite the alternating sun and rain.

Most of the volunteers will be cleaning up coastal areas, roadways and tourist spots this morning.

As of yesterday afternoon, at least 58 groups with over 1,320 volunteers have signed up with the Coastal Resources Management, which is the lead agency coordinating the cleanup.

Rachel Zuercher, CRM planner and coordinator for the 2010 coastal cleanup, said more volunteers have signed up this year than last year.

“It's very encouraging for us (CRM) to see so many of Saipan's citizens taking an active role to ensure the health and beauty of the coastal ecosystems of the CNMI,” Zuercher told Saipan Tribune.

Volunteers are encouraging citizens to always pack trash after picnics, pick up any litter they see, and most importantly, cut down on disposable goods.

“By using refillable water bottles, refusing plastic bags at the grocery store or market, and buying goods with less or no packaging, we can make an even larger impact on the health of our environment,” Zuercher added.

Raymond Cruz, compliance director at DPL, led seven other DPL personnel armed with black trash bags and gloves in picking up 60 to 70 lbs. of trash from the roadside fronting Northern Marianas College to the As Lito/Dandan intersection where the Shell gas station is located.

“It makes us feel more responsible for the environment. I just wish that people won't leave their trash anywhere they want,” he said. The unforgiving sun at 12:45pm to almost 2pm made the cleanup much harder for many.

In the San Antonio area, 10 Pacific Islands Club personnel picked up trash along the road and on the beach sites near PIC starting at 2pm yesterday.

“Our business is tourism and one of the important things we do to keep this island clean and beautiful for our tourists is to pick up trash along the roads and in the beach areas. We want our guests to appreciate this island,” said Hunsberger, who was among those picking up trash by the road along with PIC's Su Jung Lee, Ray Moreno, Dennis Tababa, among other hotel personnel.

The CNMI joins the rest of the world in the international coastal cleanup, the world's largest volunteer effort to help protect the ocean.

For young and old volunteers, spending an hour or more to pick up trash is an investment for future generations. Trash is one of the most widespread pollution problems threatening the ocean and waterways.

Others also consider the cleanup as a temporary reprieve from the economic woes and a threat of a government shutdown.

While CRM is the lead agency coordinating this year's coastal cleanup, the Division of Environmental Quality's Joe Kaipat is coordinating all trash pickup.

Besides CRM and DEQ which also provided bags and gloves to volunteers, also instrumental in the event are the trailers and trash bins from the Department of Public Works and Department of Lands and Natural Resources/Parks and Recreation. The Marianas Islands Nature Alliance also donated reusable bags for participating groups. Beautify CNMI has also assisted with publicity.

“It is certainly a huge group effort,” Zuercher added.

Last year's cleanup diverted hundreds of bags of trash from CNMI's shoreline, and disposed of the waste properly.

This year, on the 25th anniversary of the international event, CRM and DEQ are hoping to make an even larger impact.

“The event teaches the CNMI community that proper disposal of trash on land is extremely important to the health of the marine environment. What we throw on land ends up in our waterways and ocean,” Rota coordinator Bill Pendergrass earlier said.

The event aims to highlight the impact that volunteers working over just a few hours can have on the state of coastal areas.

The following are some of the participating government agencies, private companies, organizations and schools and their cleanup locations on Saipan: