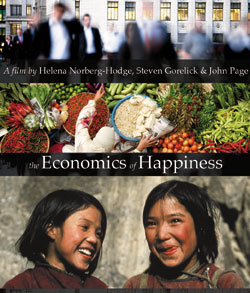 First Friday Films will be featuring its first film of the year and you don’t want to miss it. The Economics of Happiness, a film by Helena Norberg-Hodge, Steven Gorelick, & John Page, will be showing on January 6, 2012, 6:30pm at the American Memorial Parks Visitors Center.

Economic globalization has led to a massive expansion in the scale and power of business and banking. The Economics of Happiness describes a world moving simultaneously in two opposing directions. On one hand, the alliance between governments and big business continues to promote globalization and consolidation of corporate power. And on the other, people all over the world are resisting those policies. Communities are coming together to re-build more human-scale, ecological economies based on a new paradigm – the economics of localization.  More information about the film can be found here.
Anthony Pellegrino, owner of Saipan Aquaculture Co. Inc. and Cargo Air Bridge, will be on hand to discuss his vision for a sustainable local economy in the NMI as well as to share how he believes the community can participate in building it.  Additionally, he will be answering audience questions following the film.
For planning purposes, the movie runs about 65 minutes long. As always, First Friday Films is free and open to the public.
Posted by Aric Bickel at 11:16 AM

The Economics of Happiness is one of the best films by Helena Norberg-Hodge. The reviews of it at www.essaytoday.net show that it brought very important problems to the public. The director is a genius!