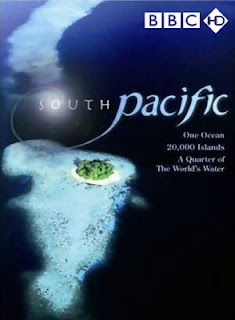 First Friday Films will be featuring another episode of BBC’s South Pacific, entitled Castaways, on April 6th, 2012 at 6:30pm at the American Memorial Park Visitor’s Center as part of their ongoing monthly environmental film series.
Remote islands that emerge out of the ocean as a consequence of different geological events are initially barren of land-based living creatures, but not for long. This episode looks at how plants, animals and humans all eventually find their ways to even the smallest and most remote of islands by riding ocean and wind currents or taking advantage of storms. Some crafty organisms even find ways to hitchhike around by attaching themselves to other species or riding along on boats with people.  Come see another episode of this beautiful series presented in HD quality Blu-ray!
First Friday Films is a monthly film series brought to you through a partnership with the National Park Service and the Division of Environmental Quality (DEQ), with generous support from community groups. This particular film is provided by the Bearden Foundation.
For planning purposes, the movie runs about 50 minutes long. As always, First Friday Films is free and open to the public. For more information about First Friday Films, check out their blog at www.firstfridayfilmssaipan.blogspot.com or email fffsaipan@gmail.com to be added to our mailing list.
Stay tuned for more information regarding our upcoming Environmental Awareness Month Film Festival on April 27 and 28 at American Memorial Park.
Posted by Aric Bickel at 10:30 AM

South Pacific is an amazing piece. My professor is writing his dissertation on the ocean's life at http://www.essaykings.me/dissertation-help/. He always brings different films and videos on it. We watched this one on Friday. That was unforgettable.