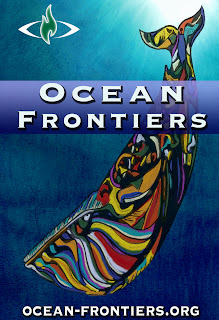 Come help us celebrate First Friday Film's 2nd anniversary and World Oceans Day!  They're celebrating by showing the film Ocean Frontiers, sponsored by the Pacific Marine Resources Institute on June 1st, 2012 at 6:30pm at the American Memorial Park Visitors Center. Following the film, audience members will also be invited into the courtyard of the Visitor’s Center for a brief reception.

Ocean Frontiers takes us on an inspiring voyage to seaports and watersheds across the country—from the busy shipping lanes of Boston Harbor to a small fishing community in the Pacific Northwest; from America’s coral reefs in the Florida Keys to the nation’s premier seafood nursery in the Mississippi Delta. Here we meet a mixture of unlikely allies, of industrial shippers and whale biologists, pig farmers and wetland ecologists, sport and commercial fishermen, reef snorkelers and many more, all of them embarking on a new course of cooperation, in defense of the seas that sustain us.  Filmed in HD, Ocean Frontiers is a documentary and outreach campaign to inspire and mobilize audiences to better care for the ocean, for the good of all.

Exhibits by DEQ Marine Monitoring Team, Pacific Marine Resources Institute, and Marianas Island Nature Alliance will be on display in the lobby area of the American Visitors Center before and after the film. After the film and courtyard reception, movie-goers are invited to join the First Friday Films crew for dinner at Spicy Thai across from the Park to discuss the films they’ve viewed and the future of our film program.

First Friday Films is a monthly film series brought to you through a partnership with the National Park Service and the Division of Environmental Quality (DEQ), with generous support from community groups and organizations such as the Pacific Marine Resources Institute, which is sponsoring this film.

For planning purposes, the movie runs about 80 minutes long. As always, First Friday Films is free and open to the public.

Find more information about the film at www.firstfridayfilmssaipan.blogspot.com. Subscribe to the blog for regular updates on upcoming events.
Posted by Aric Bickel at 11:19 AM

The movie has exceeded my expectations! It's the way to show that we should care and don't be indifferent. The professor of Iowa University Nickolas Forrest told at writers-house.com: "We are here to protect everyone who's in need".